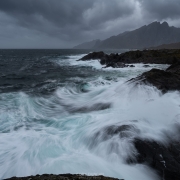 The year’s first autumn storm, or høststorm, in Norwegian, swept across Lofoten and most of the Norwegian coastline on Wednesday. Heavy rain and high winds brought both flooding and structural damage, including several washed out roads. Out driving around in the afternoon as the storm was beginning to subside, the mountains were absolutely flowing with water – I don’t think I’ve ever seen so many waterfalls before!

The morning was filled with heavy rainfall, but by mid afternoon I could see on the radar that the sky would dry up somewhat, and so I headed out looking for some photos. These storms always come out of the southwest, which is a semi-awkward direction on Lofoten to get the full visible effects of the storm, especially the crashing waves. The bridge between Flakstadøy and Moskenesøy was closed from high winds, so I decided to stay on Flakstadøy and not head west to Å, where the waves might have been hitting the strongest.

Luckily, the coastline near Nesland is also a good location for large swells coming up the Vestfjorden, and so I headed there to see what what happening. Although I should note that the several kilometres of dirt road below steep cliffs gave me a bit of hesitation, as with so heavy rain, rock and mudslides can often occur in the area – and I’m surprised my road remained open as well.

Rounding the last turn from Skjelfjord and out onto the exposed coast I could already see waves crashing high into the sky. Perfect! Arriving at the parking area and heading out to the cliffs, the air was full of mist and sea spray, giving me a constant soaking. The waves were breaking wildly and crashing high up the rocks. Almost too much chaos.

I experimented with several different shutter speeds, but in the wind and sea spray, it was a little hard to see what I was actually capturing. And between shots, it was nearly a full time job wiping off my lens. I wanted to capture some of the chaos and flow of the sea, while also showing some scale. Though I think this image is lacking on the later part, as looking at the image on my screen in no way represents what it was like standing there and feeling the crashing of the waves into the cliffs below me – and then the soaking of saltwater as the wind swept the mist over me. It was an absolutely tremendous amount of water which was moving around in a beautiful dance of chaos.