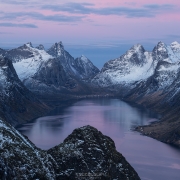 I generally don’t pay too much attention to the moon here on Lofoten. On this morning I should have! My first thought upon reaching the summit ridge of Reinebringen and seeing the full moon over the mountains in the twilight sky was that I should have arrived an hour or so earlier!

Lofoten’s northern latitude means that the moon has a somewhat ‘odd’ orbit, to put it simply and without going into technical details. So in general, the moon is not part of my active photography consciousness most of the time. Usually I’ll just randomly see it from time to time, and maybe it happens to be in a good location for a photo, though usually not.

In the summer, I’m quite aware of the sun’s elevation in the sky throughout the weeks around midsummer, where the sun never sets. For me, this is easier to plan for as it doesn’t move as quickly as the moon, so there is a little more of a buffer in regards to weather and other conditions, making the timing not so critical. But with the moon; there is only 1 full moon a month.

On this morning, I wish I had arrived earlier so that the full moon would have been in the centre of the mountain pass over Kirkefjord, instead of somewhat out of place on the right side of the image. In its current location I feel it doesn’t really and much to the scene, and is perhaps even a distraction.

Although had I been on Lofoten earlier, perhaps the moon would have been behind the small layer of clouds lower on the horizon. And, still being a week away from the return of the sun, it perhaps would have been more of a blue hour type light instead of the soft pink twilight. I’ll never know.