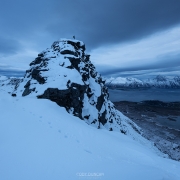 Hiking days start early in December. And even then, there still might not be enough time to get to where you were planning to go. On the case of this dark and windy December day, the objective was Vikjordtinden on the southern side of Vestvågøy. We never made it.

Every day in December we wake up before sunrise here in Lofoten. If it is just a working day on the computer, then the time doesn’t matter too much. If I’m actually planning to go outside and do something, then this needs to be as a reasonable hour in the morning as the hours of visible light are preciously short – there is no time to waste!

Heavy clouds make December’s world even darker, so even just before 10:00 we were walking through the icy forest in near darkness. Luckily, there was no snow on the lower elevations and the boggy areas were mostly frozen, making for fairly easy hiking. But soon we left what little there was of a trail and headed cross country up a steep mountain ridge. The hiking here was somewhat slow and the warm-ish thin layer of snow that we eventually climbed into the heavy, wet, and slippery. And just deep enough to fill in the dozens of holes between rocks and the bushes.

The wind was blowing strong from the south, though not terribly cold. Continuing along the ridge, the snow deepened just enough to make route finding difficult as we climbed over rocky steps, careful not to slip. This took time. It was just before 13:00 by the time we reached the first high point along the ridge, before a long descent then another long climb to the summit. Not much light left on this dark December day.

And so I took a few photos before we turned around and began the slow descent. Returning to my van by headlamp.