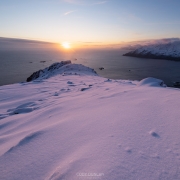 The official polar night ended on Lofoten two weeks ago and the sun rises higher and higher in the sky each day – with a total increase in 1 hour of daylight per week. Still though, mid to late January is quite a dark time on the islands, with the sun remaining perilously close to the southern horizon. So close, that even the seeming inconsequential low band of clouds on the horizon was enough to block all of this days direct light until it finally moved around them just before sunset – 14:05 on the date of this image, January 18th.

Turning around 180˚ and facing north, it was otherwise perfect weather over the whole of Lofoten. But the most light the landscape saw until this very last moment of the day was a soft winter twilight. That small layer our clouds was enough.

This was also the first day I had seen the sun in the new year of 2020. So Just barely! If I had decided to be lazy and had skipped hiking up Ballstadheia/Nonstind on this cold day, I probably would not have seen the sun at all, as hiking up to 400 meters bought me a little more light potential – which payed off in the end.

I’ve previously posted the image looking towards the north – Friday Photo #368 – Which is a much better photo and the scene I was actually up there to capture. Today’s image is an illustration of how the actual conditions look at this time of year.