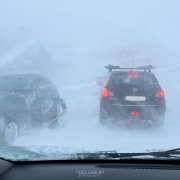 In last week’s post I wrote about the coming warm weather due on the weekend. The rain eventually did arrive Saturday night, but not before enveloping Lofoten in a heavy blizzard throughout the afternoon causing chaos along the roadways throughout the islands. By Sunday morning, Lofoten was split in two, with several avalanches closing the E10 on Flakstadøy, and avalanche in Reine, and several of the side roads closed as well. This left tourists and other locals stuck in various locations across the islands.

I myself, ended up stuck in Leknes for Saturday and Sunday nights, with my road closed already since Thursday due to avalanches. I thought about walking home of Friday, but decided against it due to weather and the high avalanche risk. When I finally made it home, I could see several areas where my road had been covered.

But the real chaos of Saturday was on the E10 between Leknes and Solvær, which, when the storm hit in early afternoon caused traffic to come to a halt. I heard stories of people taking 6+ hours to make the normally 1-ish hour drive between the two cities. I was heading towards Svolvær from Leknes when I got stuck in traffic near Eggum, with several cars in the opposite direction stuck in heavy snow drifts on the road, or off the road completely.

Shortly after, I turned around to head back to Leknes as I could the weather was obviously too severe for driving. And even on the way back towards Leknes, the car ahead of me got stuck in a drift, but I was able to help push them out, so we could continue on.

The storm was forecast to be warm and rain, so I think a lot of people were caught out, not expecting the blizzard that hit. It was the worst driving conditions I can remember for years, perhaps even back to the hurricane in winter 2015.

In one of the times I was at a standstill, I managed to get a couple Iphone shots out the window of the chaos around me. But it doesn’t come anywhere near close to showing how bad conditions were and how poor the visibility was…