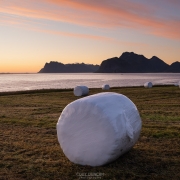 Every year beginning sometime in mid July the summer harvest of the fields begin to provide winter feed for the few sheep still remaining on Lofoten. Until two years ago my neighbor used to farm this field, but he has since retired, leaving only one sheep farmer left in my small village. Even without local sheep, the grazing land remains quite important and other nearby farmers have taken over the cutting and harvesting of the fields.

A few weeks ago – Friday Photo #496 – I posted an image of the field on a stormy summer evening, still full of flowers but already becoming quite overgrown. It felt a little later of a harvest this year, even though the summer has been a good one and the overall feel of the landscape to me is that things are a few weeks ahead of ‘normal.’ Perhaps it was the fairly cold and wet weather in the second half of July this year that has seen them waiting.

And indeed they seemed to be in a hurry once the tractors did arrive; working until after midnight on both Saturday and Sunday nights. This picture was taken at near 02:00 early Monday morning just after they had finished wrapping the bailing the loose grass. And still later they returned to collect everything!

So for the farm meadows, the flowers are now gone for this year and harvested fields remain. In a while, once the grasses grow a little taller again, the sheep and lambs will be moved into the fields during the autumn after they’ve been collected from the mountains. And then they will also be gone, along with the migratory birds and one day I’ll stand out in my yard and notice that its eerily silent; all the life and noise of summer has gone. From then on, winter is not far away.