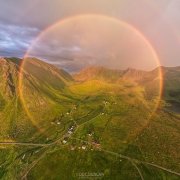 This was one of those stormy Lofoten days where the weather is quite boring and rainy during daytime, but as the sun gets lower on the horizon interesting light can happen. I had been out hiking Storknubben on GImsøy the day before in boring cloudless blue sky, but unfortunately had a meeting scheduled for this evening so I couldn’t get too far away from the house.

As midnight approached there was some nice light out in the distant mountains across the Nappstraumen so I wandered out to the field next to my house for a few shots. Soon I felt some drops of rain begin to fall while the sun was still shining bright. Behind me, I could already see the faint beginnings or a rainbow forming as the rain began to fall heavier and heavier from a seemingly invisible cloud.

With the sun low on the horizon and almost due north at midnight – the rainbow occurring almost directly south – I knew I wasn’t in the best location and it would take some time to get to a better composition for the location of the rainbow. So instead, I sent up my drone, which hasn’t seen much use this year as I understand their utility, I still have a fair dislike of them in general, just looking at the world through a tiny screen while a bunch of advanced technology does more or less all the work; that is not really photography for me. But alas, in the situation, my drone seemed like the best option, so I sent it up.

For what I generally consider the low quality image of a drone photo, I think it captured the moment pretty well, and was the only way I could do so without having already been on maybe Stornappstind, Middagstind or Møntind as the rain approached.