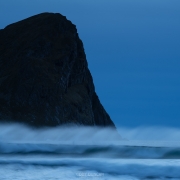 I nice and clean autumn swell was hitting Unstad the other week just a few days after the Lofoten masters surfing competition – which I unfortunately missed. I arrived a while before sunset and was mostly shooting the surfers out in the nice backlit waves. Eventually though, the sun dipped into a layer of cloud on the horizon and the light soon faded.

But as the twilight approached, the offshore wind still kept blowing a nice sea spray off the incoming sets. I watched a few sets roll through, which timed with a stronger gust of wind sent the sea spray flying in a beautiful dance above the sea.

By now it was slightly too dark for a fast shot to freeze the motion, and the light had been better when the sun was still visible. But going in the opposite direction, I tried a slightly longer shutter speed to capture a bit more of the flow of the waves and wind.

Like most things to do with the sea though, it seemed I watched the best waves pass by, and by time I pulled out the camera the conditions had changed slightly. Or perhaps its just the difference between watching the real motion of the wind and waves vs. trying to capture the moment in a still image. Either way, I think this image is a good attempt, but not really representative of the moment I was trying to capture.