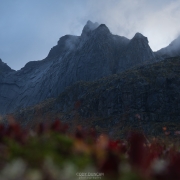 I was in the Flakstad ‘swamp’ on a rainy October afternoon looking to capture the last of this years autumn color, which after a few passing storms, had quickly faded from the landscape. The wind was mostly calm, but the frequent passing rain showers kept breaking up the reflections on the small ponds I was attempting to use as foregrounds.

The higher peaks were mostly in the clouds, but as the showers passed, they would become visible from time to time. Mostly having given up on reflections, I looked for something else to use as the foreground, and so I looked for a bit of colourful autumn foliage. As the peaks of Bjørntind emerged from the clouds, I thought I would give this composition a try.

Since moving to the mirrorless Nikon Z7 II last year, I’ve only had the 24-200 f/4-6.3 as my ‘normal’ focal length lens. While I love it for for its light weight for hiking and backpacking, I do wish it was a bit faster for a shallower depth of field. In this image for example, I wish I could have shot at f/2.8, for example, to have the foreground properly out of focus and just a blur of color. Here, I think there is still too much detail in the various leaves, and not abstract enough in my opinion.