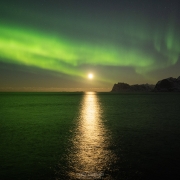 While the sun remains below the horizon during the polar night of December, the opposite effect can happen with the moon, which may remain completely above the horizon through its orbit. Often times I can forget about the moon during winter due to the cloudy weather, but this year the weather has been abnormally nice thus far, so in early December a bright moon was shining in the sky over Lofoten.

In very simplified terms, a full moon occurs when the moon is 180˚ opposite the sun. In sub arctic locations, a full moon typically rises at sunset and sets at sunrise. North of the arctic circle, the orbit of the sun and moon is flattened out. And with the sun below the horizon in for most of December, the moon’s orbit may allow it to remain slightly above the horizon at its lowest point. On the day of this image, the lowest position of the moon was 3.15˚ above the northern horizon at 11:45. At the time this image was taken at 16:31, the moon had risen to 4.8˚ degrees.

I generally quite like moonlight in my aurora images. Though this year, the full moon seemed somewhat intent on disturbing me during several northern lights shoots as it was high in the southern sky, which resulted in my shadow being cast northwards onto the foreground of a couple locations I tried to shoot from. Not a big deal, but it sometimes happens and I can’t move the aurora to another part of the sky!

On this day though, the aurora already started quite early in the afternoon. And instead of the moon being behind me, it was directly in the aurora itself. With the bright reflection shining across the dark water of Nappstraumen, I thought this was actually a somewhat interesting image that I’ve never taken before.

The exposure was slightly tricky, to balance out the reflection of the moon, northern lights, and the almost black sea. Luckily the moon was still fairly low on the horizon and dimmed a bit from some distant haze so the image was still possible with a single exposure. A little later I went to one of my nearby beaches, but by then the moon had moved to a somewhat awkward position compositionally, and was now far too bright, blowing out the reflections on the waves and wet beach.