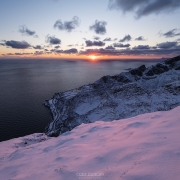 On Sunday I made a second trip up Reinebringen again. I figured since I had already put in the effort of breaking trail all the way to the summit on the previous Friday, I might as well take advantage of my own path!

Another reason for a second trip is that Reinebringen is generally a dangerous and risky hike in winter, so it is rare that I am there for a winter view. It is only since I live in Lofoten and monitor the conditions every day that I felt it was safe enough to head up in winter conditions. And this is mainly because there wasn’t that much snow – What looks like full winter is actually only about 20cm of snow in most places, and less so higher up as the storm which brought the snow was quite windy. Luckily after the storm last week, the temperatures remained well below freezing, which, combined with the lack of sunlight of the polar night, means the little snow hasn’t melted away like normal.

Currently another storm is passing over Lofoten and there is considerable avalanche risk. I will not go anywhere near the mountain in such conditions as most of the route is below slabby rock cliffs rising high overhead which are prone to frequent avalanches. It is likely now that Reinebringen won’t be safe-ish to hike again until later in the spring.

Today’s post in not about Reinebringen though, but the sun instead. And more specifically, the December sun around the first days of the polar night on Lofoten. When I was on the mountain I posted an Instagram story showing the few and a few people commented that they were surprised I could see the sun, as shouldn’t it be the polar night already? The answer is yes and yes.

If I had been standing in Reine on Sunday, I would not have seen the sun. But, like mountains peaks get the sunrise before lower elevations anywhere in the world, being on Reinebringen allowed me to see the sunrise. The only difference is this was the sun’s highest altitude of the day, so it never rose high enough to be visible at sea level.

This was also my record for latest visible sun of the year. The previous one being December 8th. It’s been a fantastic winter so far, so hopefully I get an early sun as well after the new year!