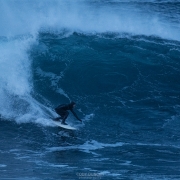 A nice and clean looking 4-5 meter west swell was forecast to hit Lofoten on Monday so I decided to head out to Unstad to checkout the action. I don’t shoot surfing too often, but when the waves are big here, there’s usually some good stuff to watch. There was only one problem this week…

It is the middle of December and Lofoten is in the period of the Polar Night – Mørketid – when the sun does not rise above the horizon. And although the sky was clear to the north, there was a heavy layer of clouds over the southern side of the islands, blocking much of what reflected light might have made it over the mountains to Unstad. So it was dark. ISO 4000 dark at noon!

I generally try to shoot surfing at 1/1000 second, and ideally closer to 1/2000 second. But in the middle of December, 200km north of the artic circle, that is not really possible. So 1/640 was the best I could manage without turning the waves into sand dunes from all the grain of a higher ISO.

Eventually, I switched to video, which was more manageable due to the lower shutter speed required. I’m still very much a beginner when it comes to video stuff, so it was at least some good practice under difficult light…